Why Is That Boat Honking At Me?

Boats manoeuvring in close proximity or in conditions of limited visibility should communicate their position or intentions with sound signals.

Virtually every boat is required to have some sound producing device. There is a great deal of latitude in what type of sound making device you choose but the louder the better.

The US Coast Guard mandates vessels over 12 meters (approximately 40 feet) be equipped with at least a whistle.

Vessels over 20 meters (approximately 65 feet) must be equipped with at least a whistle and a bell.

And vessels over 100 meters (approximately 328 feet) must be equipped with at least a whistle, a bell, and a gong.

Boats less than 12 meters must carry “an efficient sound producing device — preferably a bell, whistle or air horn — although guns or even pots and pans might be used in an emergency. 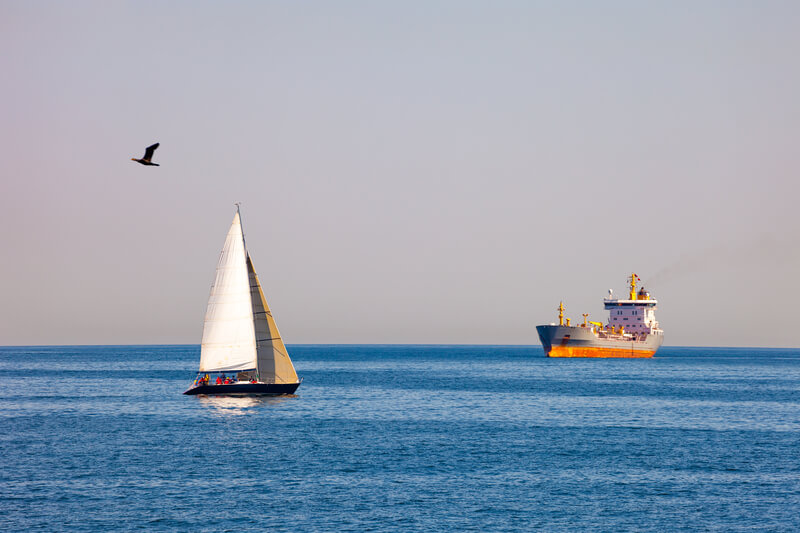 When and How to Sound Off

Sound signals are called “blasts”. There are two different blasts used for warning and steering signals.

A bell can be sounded as a single ring or as a rapid ringing for five seconds, and a gong is rung rapidly.

International Manoeuvring Signals When Under Power

Remember that a sailboat is “under power” when the engine is on, even if the sails are up.

There are different blasts combinations for various movements on the water. When power-driven vessels are in sight of one another and meeting or crossing at a distance within half a mile of each other, each vessel underway must use the following sound signals.

One Prolonged Blast – This means you are leaving a dock or departing your slip. It signals to others a change in status and that you are getting underway.

A prolonged blast is also sounded when a vessel is approaching a bend or an area of channel where other vessels may be obscured from view. It is sometimes referred to as the “blind bend signal”. This signal should be answered with a prolonged blast to indicate your presence.

Three Short Blasts – This means you are operating in astern propulsion. It is important to note that the operating astern signal refers to the shaft and propeller not to the actual motion of the vessel which can be either forward or astern.

One Prolonged Blast + Three Short Blasts – This is technically two different signals in succession. One prolonged blast indicates you are getting under way, and three short blasts indicate you are backing up. This is what is sounded when you are departing a dock in reverse.

Five Short Blasts – This is the DANGER signal.

The following sound signals are used when vessels are in sight of one another in a narrow channel or fairway:

If in agreement with these manoeuvres you should acknowledge by the following signal:

Conversely, if the vessel being overtaken is in doubt about the safety of the proposed manoeuvre, or you doubt whether sufficient action is being taken to avoid a collision, you should signal the above five short and rapid blasts of the danger signal to indicate that their intentions are unclear.

Sounds on the water are many and varied. Bells, gongs, fog horns, boat whistles all combine to produce a confusing cacophony. Knowing the different types and variety of devices used by the various classes of vessel helps mariners detect the scale of an unseen vessel by the sound it makes. If motoring, you may have to turn off the engine at regular intervals to listen for the sound signal of other vessels or of navigation aids. Do not assume a direction for the maritime horn signal as it can be distorted by fog so stop and double-check the direction then proceed with caution.

One Prolonged Blast at intervals of not more than two minutes is the signal used by power-driven vessels when making way.

One Prolonged Blast plus Two Short Blasts at intervals of not more than two minutes is the signal used by sailboats.

Powerboats or sailboats under power must give signals of One Prolonged blast every 2 minutes to indicate their changing position as they move through the water.

A powerboat or sailboat under power that is stopped (not moving through the water) must give signals of Two Prolonged blasts every two minutes to indicate their position.

A sailboat or any boat that is restricted in its ability to move, towing or pushing another boat, or is currently engaged in fishing, must give One Prolonged Blast and Two Short Blasts every two minutes.

If you are boating in conditions of restricted visibility and you hear any of these signals, slow down to minimum speed until you can safely ascertain your relative positions and move forward without a collision.

Sound signals are not totally necessary during days of clear visibility, as long as you keep a safe distance between yourself and other boats, but they are a must on foggy days.

Some countries may have different inland waterway regulations, for example in the United States port and starboard signals are reversed and there are different overtaking signals.

Inland waters are noted by dashed magenta lines on many charts and labelled COLREGS DEMARCATION LINES which are the boundaries of restricted-navigation zones. To seaward of these lines, or where the lines do not exist, a skipper must follow the International rules – more formally known as the 1972 International Regulations for Preventing Collisions at Sea (72 COLREGS). Where these lines exist, and inshore of them, a skipper must use the specific Inland Waterway Rules.

eSail is available for Windows and Apple Mac.
Join the eSailing community now!